It is located in two valleys of north-southern direction, south to Gyugy – hát the thord highest point of Somogy County (311 m high), in the northern part of Outer-Somogy hills.

It is south to and approximately 10 km far from the Lake Balaton. It is accessible in the road slipping from the main road Szántód-Kaposvár and since August 2007 directly from the highway No M7. It is a settlement with a dead end. Egyik különlegessége a Székelykapu, amit Torja, erdélyi testvérvárosuk ajándékozott a falu számára. One of its speciality is the Székely gate. In 2010 the Transylvanian village, Torja gave to Bálványos as a gift, to make their twin towns relationship stronger. In Bálványos there are nice possibilities for fishing and making tours in the small hills of the Somogy land. It is worth of climbing up to the top of the hill and seeing the nice landscape and the village that reminds us of the history. 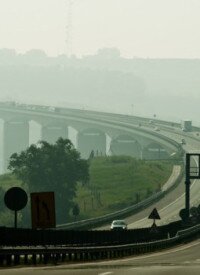